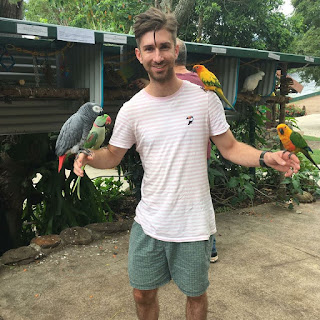 Harry Eyck commenced his PhD at UNSW in February 2019, after having completed his honours at Deakin University studying developmental stress in Zebra finches (Taeniopygia guttata).

His PhD work, under the primary supervision of Lee Ann Rollins, focuses on host-parasite interactions in invasive systems. When invasive species colonise new habitat, they often carry their parasites with them. This can lead to an evolutionary arms-race, causing major selection pressure for both parasites and their hosts. Despite this, they remain understudied. To investigate this, Harry studies the nematode lungworm (Rhabdias pseudosphaerocephala), which was brought to Australia by the infamous Cane toad (Rhinella marina).

His projects include assembling the lungworm genome, exploring how its genome has changed between populations with vastly different host-parasite interactions, and doing fieldwork and experiments investigating its behavioural responses and infection dynamics.

Posted by Richard Edwards at 10:08