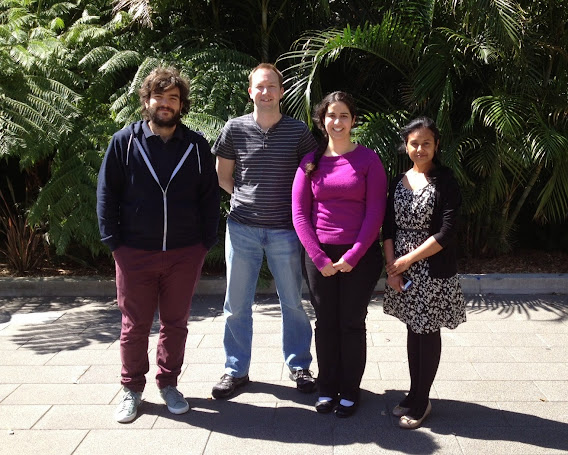 All good things come to an end and so the Edwards lab bids a fond farewell to Dr Nico Palopoli (outside left) and Armella Zadoorian (inside right) who have recently left the lab. Nico returns to his homeland of Argentina today to take up a new position, whilst Armella’s internship came to an end last week and is getting ready for exams. Hopefully, Ranjeeta (outside right) won’t get too lonely without them.

Posted by Richard Edwards at 16:45 No comments:

The ABiC 2014 posters are being recycled for the 7th Garvan Signalling Symposium:

Come and check them out if you are in the Garvan on the 13th and 14th.

Posted by Richard Edwards at 12:00 No comments:

Congratulations to the #ABiC14 team for a fantastic conference!

The Edwards Lab had a couple of posters at the Australian Bioinformatics Conference (ABiC 2014) (see here and here). It was a great conference and really set the bar for future bioinformatics conferences.

I’ve posted some reflections on what made ABiC 2014 so good over on my personal blog but wanted to reiterate my thanks and praise to the ABiC 2014 Committee for such a great meeting - and to encourage attendance of ABiC 2015, should there be one!

More details of the meeting can be found at the ABiC 2014 conference website and the #ABiC14 twitter stream. 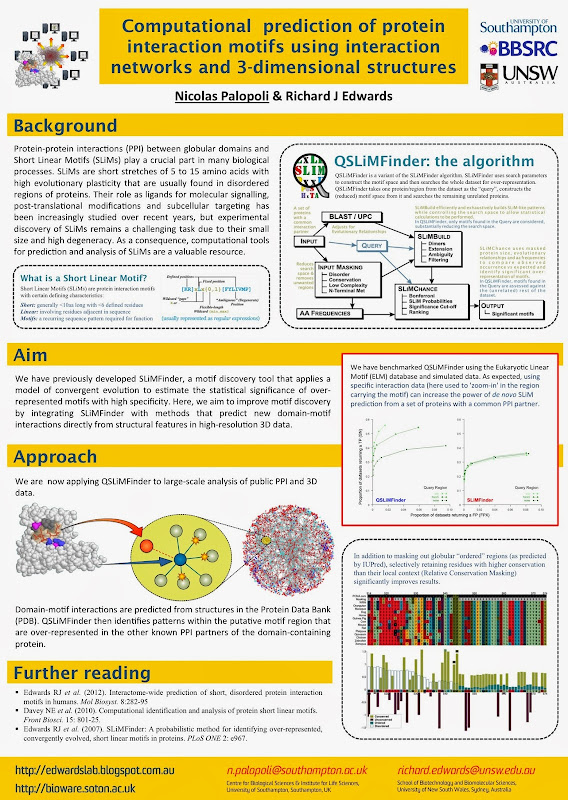 Protein-protein interactions (PPI) between globular domains and Short Linear Motifs (SLiMs) play a crucial part in many biological processes. SLiMs are short stretches of 5 to 15 amino acids with high evolutionary plasticity that are usually found in disordered regions of proteins. Their role as ligands for molecular signalling, post-translational modifications and subcellular targeting has been increasingly studied over recent years, but experimental discovery of SLiMs remains a challenging task due to their small size and high degeneracy. As a consequence, computational tools for prediction and analysis of SLiMs are a valuable resource.

We have previously developed SLiMFinder, a motif discovery tool that applies a model of convergent evolution to estimate the statistical significance of over-represented motifs with high specificity. Here, we aim to improve motif discovery by integrating SLiMFinder with methods that predict new domain-motif interactions directly from structural features in high-resolution 3D data. To this end we have developed “Query” SLiMFinder (QSLiMFinder), which uses knowledge of the interaction interface to constrain the motif search space and thereby increase search sensitivity. We have benchmarked QSLiMFinder using the Eukaryotic Linear Motif (ELM) database and simulated data. As expected, specific domain-motif interaction data can increase the power of de novo SLiM prediction from a set of proteins with a common PPI partner.

We are now applying QSLiMFinder to large-scale analysis of public PPI and 3D structure data. Domain-motif interactions are predicted from structures in the protein data bank (PDB). QSLiMFinder then identifies patterns within the putative motif region that are over-represented in the other known PPI partners of the domain-containing protein. This will add crucial molecular details to the interactome. 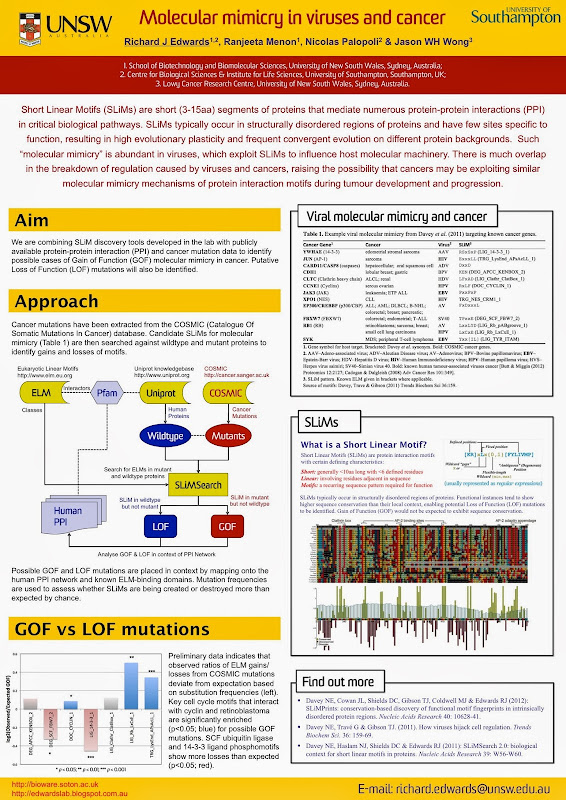 Molecular mimicry is a well-established example of convergent evolution by which viruses evolve protein motifs that interact with host molecular machinery to hijack cellular functions. These short linear motifs (SLiMs) have only a handful of critical positions and a single point mutation is often sufficient to create or destroy a motif occurrence. This may have direct effects, such as eliminating a key regulatory interaction, or more subtle indirect effects by altering/blocking neighbouring interactions. There is much overlap in the breakdown of regulation caused by viruses and cancers - including oncogenic viruses - and so it is likely that many cancers are exploiting similar molecular mimicry mechanisms of protein interaction motifs during tumour development and progression.

We are combining publicly available datasets of host-host and host-pathogen PPI with recently developed tools from the SLiMSuite package to (1) identify novel candidates for viral mimicry of known host SLiMs, and (2) predict entirely new SLiM classes. In each case, signals of convergent evolution are identified using statistical over-representation of motifs in unrelated proteins. We are also using SLiM analysis tools to identify putative gain- and loss-of-function mutations from public cancer mutation databases. SLiM predictions and mutations will be placed in context using the human protein-protein interaction network and cross-referenced to known viral molecular mimicry and proteins/pathways affected in cancer. Simulated mutation data will be used to test for possible enrichment of mutations that create or destroy SLiMs.

Posted by Richard Edwards at 16:55 No comments: