The Edwards Lab and close affiliates have five posters at GIW-ABACBS2019 this year. Come and check them out during the two poster sesstions: 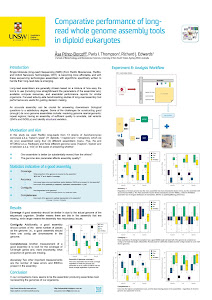 The latest generation of assembly tools decide how to process reads based on a genome size parameter. For heterozygous diploid organisms, it is not clear whether this should be the haploid or diploid genome size, or something in-between based on heterozygosity. In this study, we used three genome size settings: haploid (13.1Mb), diploid (26.2Mb) and half-way in-between (19.65Mb). This will enable us to establish how the genome size parameter influences the quality of the resulting genome assembly. 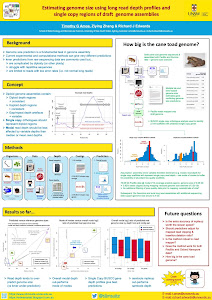 Estimating the size of a eukaryote genome is a fundamental task in genome assembly. As well as informing decisions on sequencing technology and depth, greater accuracy in genome size prediction can assist in assessing the completeness and duplication of a genome assembly. Genome sizes can be estimated through both experimental and genome sequencing approaches. Experimental methods include densitometry, flow cytometry analysis of stained nuclei and quantitative PCR (qPCR) of single copy genes. Genome sequencing approaches include short-read k-mer distributions. However, these methods can give variable results, and are prone to inaccurate predictions for genomes with abundant repetitive sequences.

Here, we show that the read depth of long reads in a draft genome can be used to provide a relatively accurate estimate of genome size across various model organisms. In general, diploid genome assemblies will consist of regions of haploid, diploid and incorrect (or multi-copy organelle) depth. Repeats and assembly errors are likely to be highly variable in terms of genome vs assembly copy number and, therefore, coverage. The modal read depth of conserved single copy orthologues should therefore approximate the sequencing depth of the input data, which can be extrapolated to estimate genome size. We found that our method can provide comparable, if not more accurate, estimates than short-read k-mer distributions. 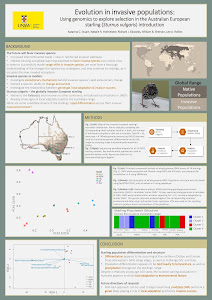 Invasive species are a global concern due to their negative impacts on the economy and local ecosystems. However, well-documented invasions provide a useful system in which to pose biologically interesting questions regarding short time scale evolution. Answering these questions will further our knowledge of evolutionary mechanisms, as well as inform specific management strategies for the invasive population. The European starling (Sturnus vulgaris) is a global pest that was introduced into Australia’s south-eastern states in the 1860’s and has since greatly expanded its range. Previous research on multiple introduced starling populations has demonstrated that their morphology has undergone subtle shifts following colonisation. My research applies a range of sequencing techniques to investigate genomic variation across Australia’s starling population. We are combining long-, short- and linked-read whole genome sequencing to assemble a high-quality starling reference genome. This genome will be annotated using Iso-seq long-read (PacBio) whole transcriptome sequencing in order to properly identify putatively evolving loci. Population sequencing data (whole genome and DArTSeq) will be mapped onto this reference to identify functional SNPs and reveal potential drivers of the rapid phenotypic divergences across the Australian population. 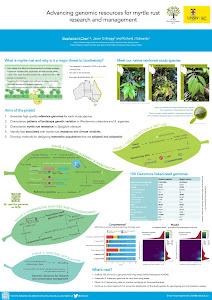 Myrtle rust is a plant disease caused by an invasive fungal pathogen (Austropuccinia psidii) first detected in Australia in 2010. Over 350 native species from the family Myrtaceae, which includes eucalypts, paperbarks, tea-trees, and lillipillies, are known hosts. Detailed genetic information needed for an effective and coordinated response encompassing conservation management is lacking. We performed de novo genome assembly and annotation for two species which exhibit a spectrum of resistance – Rhodamnia argentea (malletwood) and Syzygium oleosum (blue lilly pilly). Reference genomes have been generated using 10X linked reads, and are being supplemented with long reads and a hybrid assembly approach. These genomes will complement reduced representation sequencing (DArTseq) and rust resistance assays from different genotypes across the landscape. Together, these data will facilitate the characterisation of genetic structure and rust resistance across space as well as within and among species. This research is crucial for the management of at-risk species through optimising methods of improving disease resistance and adaptation to future climates in addition to increasing our understanding of myrtle rust which is a pressing concern to native biodiversity. 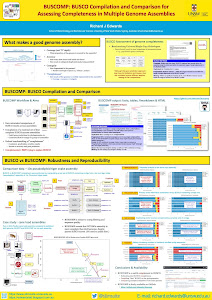 Advances in DNA sequencing technology and bioinformatics tools have placed de novo genome assembly of complex organisms firmly in the domain of individual labs and small consortia. Nevertheless, the assemblies produced are often fragmented and incomplete. Optimal assembly depends on the size, repeat landscape, ploidy and heterozygosity of the genome, which are often unknown. It is therefore common practice to try multiple strategies, and there is a bottleneck in assessing and comparing assemblies.

BUSCO [1] is a powerful and popular tool that estimates genome completeness using gene prediction and curated models of single-copy protein orthologues. However, results can be counterintuitive: adding/removing scaffolds can alter BUSCO predictions elsewhere in the assembly, while low sequence quality may reduce “completeness” scores and miss genes that are present in the assembly [2].

BUSCOMP (BUSCO Compilation and Comparison) complements BUSCO to identify/overcome these issues. BUSCOMP compiles a non-redundant set of the highest-scoring single-copy BUSCO complete sequences, rapidly searches these against assemblies, and robustly re-rates genes as Complete (Single/Duplicated), Fragmented/Partial or Missing. On test data from three organisms (yeast, cane toad and mainland tiger snake), BUSCOMP (1) gives consistent results when re-running the same assembly, (2) is not affected by adding or removing non-BUSCO-containing scaffolds, and (3) is minimally affected by assembly quality. This makes BUSCOMP ideal to run alongside BUSCO when trying to compare and rank genome assemblies, even in the absence of error-correction.

Posted by Richard Edwards at 10:11